How much has changed? The technology or our human behaviour? Hear from Director, Writer and Filmmaker, Marcus Romer as he looks at our eagerness to witness, share and be part of activities and events no matter how remotely.

With a focus on live to digital distribution, live streaming and how to access a wider audience.

Followed by a Q&A with Marcus Romer.

There will be plenty of networking time and refreshments before and after the session. 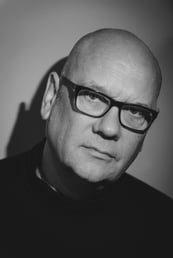 From April 2016 - March 2018  he was the Associate Artist at the Theatre Royal, Stratford East.

He is currently Associate Artist at Collusion, and is also developing a new project for July 2018.

Prior to this he was CEO and Artistic Director of Pilot Theatre, where he directed many award winning theatre productions as well as pioneering live streaming and webcasting from 2008.

As a filmmaker he wrote the screenplay and co-directed the feature film ‘The Knife That Killed Me’ which was released by Universal Pictures in 2015.

He created the ‘Shift Happens’ Conferences, and ran TEDx York. He co-curated 'No Boundaries' with ACE and the British Council in 2014 and 2015.

He was part of the winning bid team that won York the Unesco designation as the first UK City of Media Arts. He attended and gave a keynote at the Creative Cities Network Conference in Seoul.

Marcus is a regular speaker and presenter on the use of digital technology in the Arts, and has spoken all over the world, most recently in Harstad, Tromso and Oslo in Norway and Karlsruhe in Germany.